On November 8th, government announced the decision to discontinue the legal tender status of Rs. 500 and Rs. 1000 notes. The original objectives were stated as: eliminating fake currency; inflicting losses on those with black money; and disrupting terror and criminal activities. Later, new objectives were tacked on: enabling growth in bank credit, turning India into a cashless economy.

A study by the National Investigation Agency and the Indian Statistical Institute, in 2016, estimated that fake Indian currency notes in circulation have a face value of Rs. 400 crore. This is an incidence of fake currency of 0.022%. The scale of counterfeiting of the Indian rupee is not out of line with what is seen in other countries, and the procedures adopted worldwide to address this include investigative actions against counterfeiters, phased replacement of old series of notes with new notes that have better security features, etc. De-monetisation is generally not seen as a tool for dealing with counterfeiting. We must also not forget that the counterfeiters will now get to work on the new 500/2000 rupee notes, while India will likely never do a de-monetisation again. 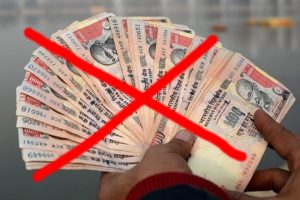 The analysis presented in the Finance Ministry’s White Paper on Black Money, 2012, shows (on page 47) that, on an average, the amount of cash seized during raids by income tax authorities is 4.88 percent of total undisclosed income admitted in those cases. This data is from more than 23 thousand warrants executed. Even if this decision inflicted a 100% loss upon holders of unaccounted cash, this would imply a loss of 4.88% of their total unaccounted wealth, which is not much of a shock for those with such wealth. If, as is more likely, the demonetisation has imposed a 40% loss upon holders of unaccounted wealth (who suffer a 40% discount when laundering the money), this implies a loss of about 2% of unaccounted wealth.

Cash is a store of value (white or black), but it is also a medium of exchange. Most people in India only transact with cash. More than 90 percent of shops accept only cash or very short-term credit. Large number of laborers and small value suppliers are paid in cash. While these facts may change over time, they mean that this sudden ban may be leading to disruptions in consumption and production. Compared to the 10,000 yen note (USD 137 in Purchasing Power Parity), the 1000 swiss franc note (USD 775), the USD 100 note, or the 500 Euro (USD 530) note, the Rs. 1000 (USD 31 in Purchasing Power Parity) and Rs 500 (USD 15.5) are practical notes that are used for transactions. Hence, de-monetisation of these notes is a large adverse monetary shock, perhaps the largest ever such shock in world history. The constraints of ATM recalibration and currency printing are leading to a long transition period. Even ensuring 50 percent re-monetisation in cash form, about Rs. 7.5 lakh crore, appears hard by December-end. The Centre for Monitoring of Indian Economy has estimated that a few elements of the first-round impact give a reduction of GDP of around Rs. 1.3 lakh crore; the total impact will be higher owing to the multiplier effect, the hysteresis associated with the monetary shock, the impact upon expectations, etc.

Who bears the costs?

While there is much talk about the GDP impact of this decision, a unique feature of this episode is that there may considerable other costs that fall disproportionately upon the poor. The rich have access to electronic payments, employees who will stand in queues to obtain cash, and savings that are used to cope with a decline in income. The poor lack all these. If a poor person suffers an income shock, or is not able to get medical treatment, the consequences are enormous for the individual, but the GDP impact may be negligible. In terms of welfare implications, these costs matter a lot more than the impact on GDP.

Four key arguments are being forwarded in support of the decision:

It is claimed that the decision is likely to have a smaller impact on the poor than what many, mostly anecdotal, reports suggest.
The monetary shock can be, and will be, quickly overcome by the use of monetary policy instruments to restore liquidity.
This decision will expedite the process of making India a “cashless economy”, with benefits that will make short-term costs worthwhile.
Since the decision is popular, it must be good. This raises an interesting question: in a democracy, can there be a better measure of goodness of a policy than its popularity?

Small impact on the poor?

Two ideas have been offered in the claim that the adverse impact upon the poor will be small: