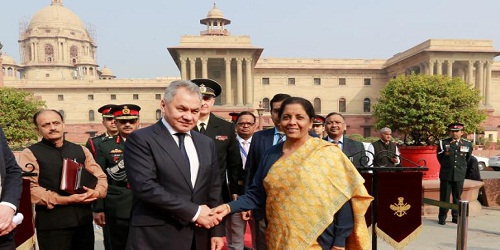 On December 13, 2018, the 18th India-Russia Inter-Governmental Commission on Military Technical Cooperation (IRIGC-MTC) was held in New Delhi.
i. The meeting was co-chaired by Defence Minister Nirmala Sitharaman and her Russian counterpart General Sergei Shoigu.
ii. It was a part of the bilateral Special and Privileged Strategic Partnership between Russia and India.
iii. The following took place in the meeting:

Discussions took place on various topics like defence equipment, industry and technological engagement as well as after-sales support and upgradation of military equipment of Russian origin.
inter-governmental arrangements for facilitating joint manufacturing of spares for Russian origin equipment in India, under the ‘Make in India’ initiative would be undertaken.
MOU signed in the meeting:

A revised Inter-Governmental Agreementon restructuring the existing IRIGC-MTC to the IRIGC on Military and Military Technical Cooperation was also signed by the two Ministers.
iv. An additional institutional Working Group would also be set up under the expanded commission. It would be headed by
Chief of Integrated Defence Staff to the Chairman Chiefs of Staff Committee (COSC) and Deputy Chief of the Main Operational Directorate of General Staff of Armed Forces of Russian Federation.
Background:
A deal worth $5.43 billion was signed between India and Russia to buy Russian S-400 air defence missile system on October 2018. The two countries also signed a deal to build two frigates in Goa for the Indian Navy.
Russia:
♦ Capital: Moscow.
♦ Currency: Russian ruble.
♦ President: Vladimir Putin