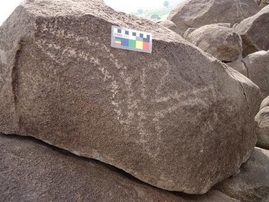 Andhra Pradesh’s second largest petroglyph site, containing about 80 petroglyhs, has been discovered at Mekala Benchi, near Aspari, in Kurnool district. These petroglyphs, or rock carvings, underscore Kurnool’s importance as a major site of Neolithic settlements in south India.
Kandanathi, with 200 petroglyphs, is also in Kurnool district. While Mekala Benchi has rock carvings dating back from the Neolithic to the Megalithic period, Kandanathi’s carvings range from the prehistoric to the historic period.
The petroglyphs were recently discovered by Yadava Raghu, an archaeologist and academic consultant with Yogi Vemana University’s Department of History and Archeology. Two boulders, one known as ‘Boodida Konda’ (ash-coloured hill) and the other an unnamed granite hillock, mostly have images of bulls or bull-riding, and human figures, an elephant, tiger-like animals and cupules.