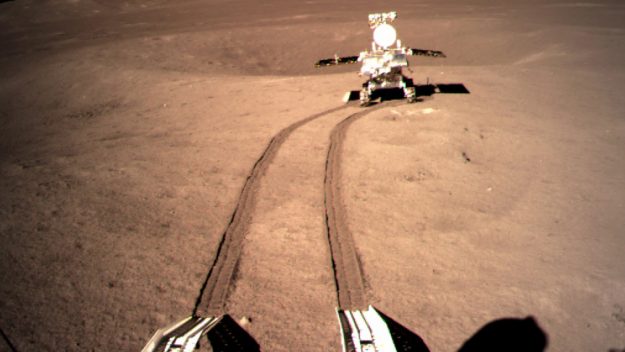 China has named the lunar rover, successfully deployed on Thursday to carry out a string of experiments on the unexplored far side of the moon, as ‘Yutu 2’.
The state-run Xinhua news agency reported that the Yutu 2 touched the lunar surface at 10.22 p.m. local time on Thursday, leaving a trace on the loose lunar soil. The rover’s touchdown is part of China Chang’e-4 lunar probe.
Analysts say that China’s lunar probe is part of its ‘Made in China-2025’ project, which focuses on advanced technology, including space applications.
Homegrown GPS
It follows the BeiDou Navigation Satellite System — China’s homegrown Global Positioning System that started worldwide service last month. Next year China plans to launch its Mars explorer mission. In 2022, it hopes to complete its own earth-orbiting space station.
Some observers say that China’s advances can mutate into a Cold war-style competition in outer space with the United States. Already, China and the United States are roiled in a so-called trade war. U.S. administration officials are on record stating that there is deep opposition to the ‘Made-in-China 2025’ project.
The Hong Kong based South China Morning Post quoted Chen Hongqiao, a researcher at Guangdong University of Foreign Studies in the southern city of Guangzhou, as telling that the landing could intensify the space race between China and the U.S. “Today the fight [between China and the U.S.] is on trade. Tomorrow it can be on the moon,” he observed.
A military dimension?
According to the Nikkei Asian Review, after the latest launch, Beijing is moving forward with plans to build a research base on the moon. It is also said to be considering mining there for helium-3, a rare substance on earth that can be used as a fuel in nuclear fusion power generation. The publication added that the U.S. is growing increasingly alarmed because a more advanced Chinese space programme could be translated into military strength.
The rover has been programmed to launch ground penetration radar that would help map the moon’s inner structures. It would also analyse soil and rock samples for minerals, apart from activating a radio telescope to search for possible signals from deep space.