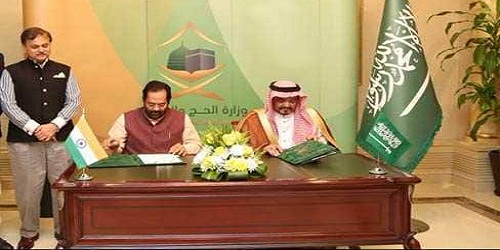 On 13th December 2018, a bilateral annual Haj agreement 2019 was signed between India and Saudi Arabia by Union Minister for Minority Affairs, Shri Mukhtar Abbas Naqvi, and Haj and Umrah Minister of Kingdom of Saudi Arabia, Dr Mohammad Saleh bin Taher Benten at Jeddah, Saudi Arabia.
Key Points:
i. This year more than 2,100 women have already applied to go to Haj without ‘Mehram’ (male companion) after the Modi Government had lifted ban on women going to Haj without Mehram last year and they had also been exempted from the lottery system.
ii. The Haj Committee of India has received more than 2.47 lakh applications next year’s pilgrimage which includes about 47 per cent women.
iii. For the first time after the Independence, a record 1,75,025 Muslims from India performed Haj 2018 which include about 48 per cent women and that too without any subsidy.