Industrial Park Rating System to be released by Commerce Ministry 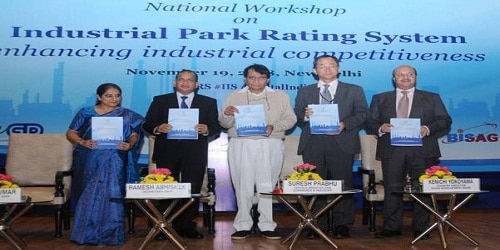 On November 19, 2018, Minister of Commerce and Industry Suresh Prabhu released report on Industrial Park Rating System at a national workshop in New Delhi.
i. It is a part of centre’s vision to make India a 5 Trillion Dollar economy out of which 20 per cent is expected to be generated from industries.
ii. It would help increase competitiveness of industries and promotion of the manufacturing sector as it would assess the parks against global standards.
iii. As industrial parks play a major role in the growth of the industrial sector in India, this will help enhance the competitiveness of industries in India.
iv. Thus good infrastructure will bring down the cost of doing business in India and provide a conducive environment for investments in industrial sectors.
About the IPRS:
i. The system will be developed by the ministry to assess industrial parks in the country based on four pillars. They are:

Internal and external infrastructure, connectivity, environment and safety management, and business support services.
ii. The system would assess 200 such parks on several parameters such as sewage effluent and treatment; and water treatment.
Background:
There are over 3,000 industrial parks in the country in sectors including engineering, software, food processing and chemicals.
Ministry of Commerce:
♦ Union Minister: Shri. Suresh Prabhu.
♦ Minister of State: Shri. C R Chaudhary.