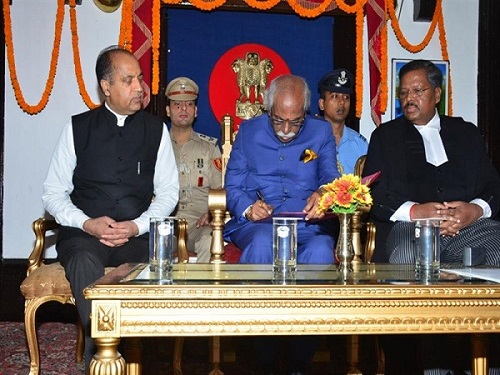 • Justice Lingappa Narayana Swamy was sworn in as the Chief Justice of the Himachal Pradesh High Court. He was administered the oath of office by Governor Bandaru Dattatraya in a simple but an impressive ceremony held at Raj Bhawan. Chief Minister Jai Ram Thakur was also present on the occasion.

Justice Lingappa Narayana Swamy, B.A., L.L.M., born on 1st July 1959, was enrolled as an Advocate on 15th October 1987. He practiced for 19 years before the High Court of Karnataka, Karnataka Administrative Tribunal & Central Administrative Tribunal, Bangalore in civil, criminal, constitutional, service and labour matters. He specialized in constitutional matters. He worked as High Court Government Pleader from 1995 to 1999. He was appointed as an Additional Judge of Karnataka High Court on 4th July 2007 and appointed as a permanent Judge on April 17, 2009.