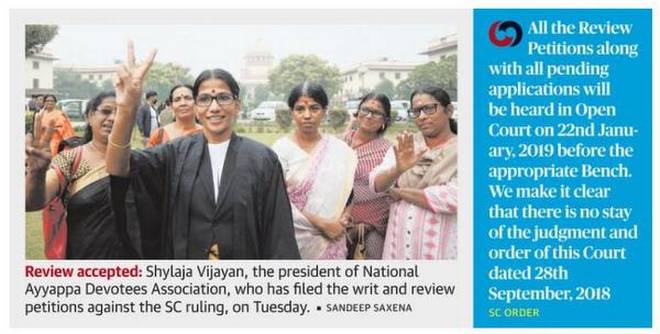 The Supreme Court on Tuesday agreed to hear in open court review petitions against its majority judgment which lifted a ban on women aged between 10 and 50 years from undertaking the pilgrimage to the Sabarimala temple in Kerala.
The review petitions will be heard by an “appropriate Bench” in open court on January 22, next year.
The Review Bench of five judges, led by Chief Justice of India Ranjan Gogoi, however, refused to stay the majority judgment by a Constitution Bench on September 28. The majority judgment had declared the exclusion, solely based on the menstrual status of women, to be a smear on individual dignity. It said the bar amounted to “treating women as the children of a lesser God”.