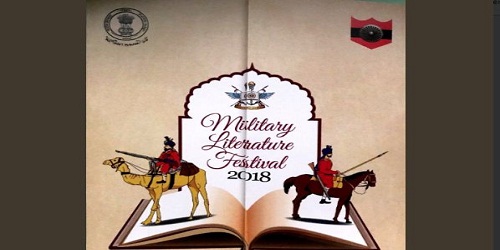 On December 7, 2018, the 3-day Military Literature Festival (MLF) 2018, commenced at Lake Club in Chandigarh. The festival will conclude on December 9, 2018.
i. The festival is a joint initiative of:

First session on ‘Role of Cross Border Operations & Surgical Strikes’,
Second session on the ‘Contribution of India towards the First World War’,
Third session was on sessions ‘Two Battles For Survival – Ferozshah 1848 and Chilianwala 1849’, and ‘Indian Cavalry Charges of the First World War and the Gallipoli Campaign’.
iii. A ‘Clarion Call‘ theatre was set up which screened 40 short films on the Army’s wars since Independence, is the new attraction.
iv. It also showcased the famous battle of Longewala and other documentaries the famous battles of Saragarhi, Basantar, Dograi, and Bana Top besides the naval battles of 1971 and world’s largest tank battle of Khemkaran.